The Doncaster Book Award had its biggest ever launch this year when over 750 children and special guests joined comedian and author David Baddiel for a fabulous and fun-filled event at the Doncaster Dome.

It was the first time the DBA have used this great venue and from the outset the welcome for arriving guests was a warm one, with a fantastic DBA banner to walk under and giant book covers from the long-list titles lining the entrance. These truly set the scene, providing wonderful photo opportunities and sparking discussions on who had read which books before the children even got inside!  The hall filled up really quickly with and you could feel the excitement build as the start time drew near.

As ever, our Chair Lesley opened the afternoon with a warm welcome to everyone, and then introduced our event host, the inimitable James Worthington from Talegate Theatre. James, rocking a Doctor Who-type vibe in waistcoat and watch chain, is well-known to Doncaster’s young people and in his usual style immediately upped the already high energy level by several degrees! He then introduced Phil, who ‘galloped’ through the new lists, showing all the great books we have on offer this year and encouraging the children to start reading and reviewing them on the website. They have an extra incentive to do so this year, with DCLT offering special bookmarks which, when teachers stamp them for each completed review, will entitle the child to a free activity including a swim or skate, in any DCLT leisure centre. Phil also showed a special presentation on our ‘Classics’ list which has a special ‘international’ flavour this year to tie-into the up-coming Brazil Olympics.

It was then time for James to introduce our special guest, David Baddiel, and he came on to deafening applause.  In a homage to his famous TV show, we had a sofa and chair set up on stage.  James began in true chat-show style by asking David some questions about his career, how he got into writing children’s books and the inspiration behind his stories. David then read aloud an extract from his book The Parent Agency and described how the hero, Barry Bennett, like many kids, is feeling a bit fed up with his parents when the wall of his bedroom magically transforms, allowing him to step into another world where he can choose the parents he wants.  This sounds fantastic, but will it be as wonderful as Barry thinks? David then asked his audience what type of parents they would like if they had a choice; cue a cardio work-out for host James who had to run with a microphone up and down steps and around and between the rows of seats to hear their responses. These were not always what you might expect and some had audience in stitches, especially when one child wished for chocolate parents!

To allow James to recover and get his breath back, the next part of the interview was conducted by a group of students from Armthorpe and Hexthorpe schools. They were excellent, with really insightful questions that allowed us to find out lots more about David and his writing. David concluded the event with a reading of a very funny extract from his new book The Parent Controller and a brief chat about the story and its main characters.

We could have taken loads more audience questions at this point, but since so many of the children wanted to get books signed, and to get autographs and photos with David, James introduced Lesley to the stage once more to thank everyone and bring to an end the formal part of the afternoon. I spoke to many of the children, their teachers and other guests as they queued up to meet David afterwards, and it was clear that the event had been a roaring success. The signing went on for an hour and a half, so we can only hope David did not leave the Dome with repetitive strain injury!! It was one of our best events ever and we are all really excited about the many great events to come this year.

Photos from the Event

Ready for the hordes

Phil and his wonderful Around the World video

David reading from his books

David reading from The Person Controller

David reading from his new book The Person Controller

James, rovinc mic in tow, getting into the audience for questions

James with the fabulous Showsec, who organised seating and looked after us all

James, Charlotte and Phil. Charlotte went over and above to make the event run smoothly 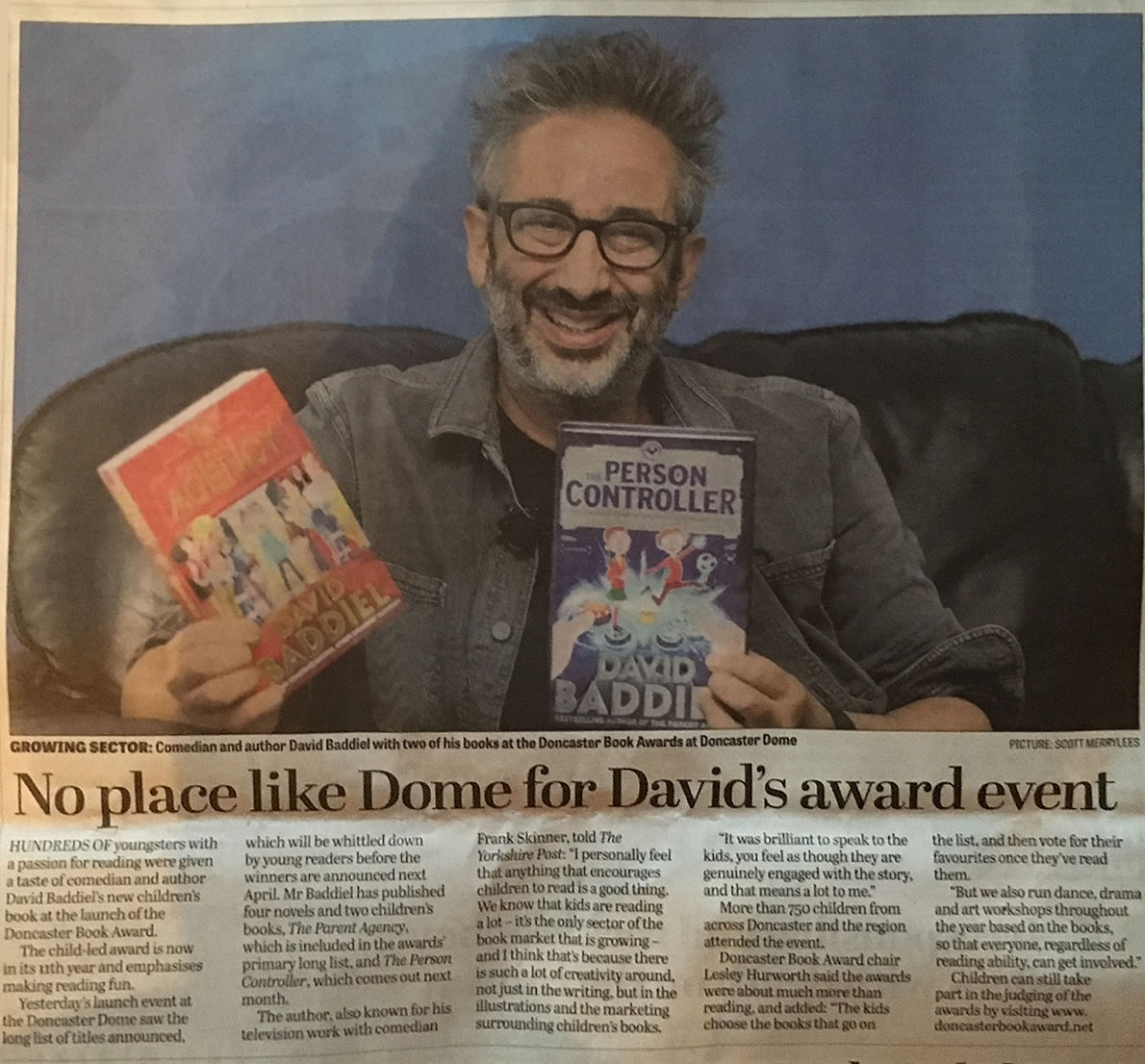 Please click the image on the right to view the article full size in a new browser tab or window. (If your browser shrinks it to fit the window, click (once) to enlarge it.) 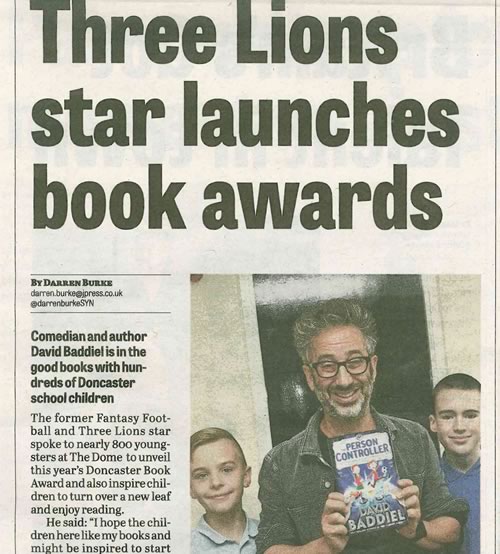 In the Press: Doncaster Free Press

Please click the image on the right to view the article full size in a new browser tab or window. (If your browser shrinks it to fit the window, click (once) to enlarge it.)